Reaching Children through the Wonder of Musical Theatre - Since 1977

Looking for information about our Professional Tours?

to schools and organizations throughout the Delaware Valley.

a Little Production for Little Learners... 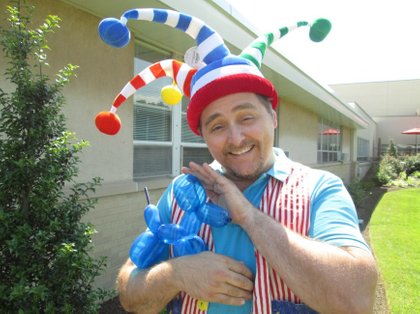 Shoestring Productions of Brandywine Valley (non-profit/tax-exempt), specialists in original musical theatre for young audiences, has created a mini-musical for ages 3-6 featuring our amazingly talented and funny friend, “Macaroni”.  Using juggling, balloon “puppets”, and music, “Macaroni” will engage and entertain your children with an interactive show about…well, being nice!  Using the magic words “please” and “thank you”, demonstrating good social skills, and getting along with others are key concepts.  To extend the lesson, a CD or MP3 file of the theme song, “Be Nice”, is provided for teachers.

We would love to bring our show to your children!

Available for the 2014-15 school year, “Be Nice” continues the Shoestring tradition of providing entertainment for those keeping to a“shoestring” budget.  Happily,  PARTIAL FUNDING FROM GRANT SOURCES AVAILABLE FOR THOSE WHO BOOK EARLY!

for further information or to book a performance.

Hope to hear from you soon!!